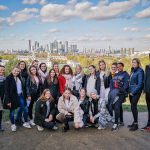 … and we answered! From the 19th to the 25th October, we (the 4FHW, Mr. Meth and Ms. Gutschlhofer) went on a cultural adventure to London! Our trip began at the airport in Innsbruck, from which we flew to London Gatwick. After a 1,5-hour bus drive, we were finally able to check into our hostel! Besides visiting the different sights like London Eye, London Dungeon, Royal Observatory, British Museum, Buckingham Palace and many more, we had a chance to taste different typical English food and we even had the opportunity to talk to native Londoners during our interviews about Brexit for a school project.

An absolute highlight for us was the Jack the Ripper walk, in which we learned about the victims of said murderer, went to the places they were killed and were presented different theories on who actually was Jack the Ripper. We defied wind and weather, short nights and long days, immersed into the shockingly scary history of London and were part of the big city life for a few days. So overall, we had an exhausting, but fun week in London and many unforgettable experiences! – Katharina Lettner and Emma Haider